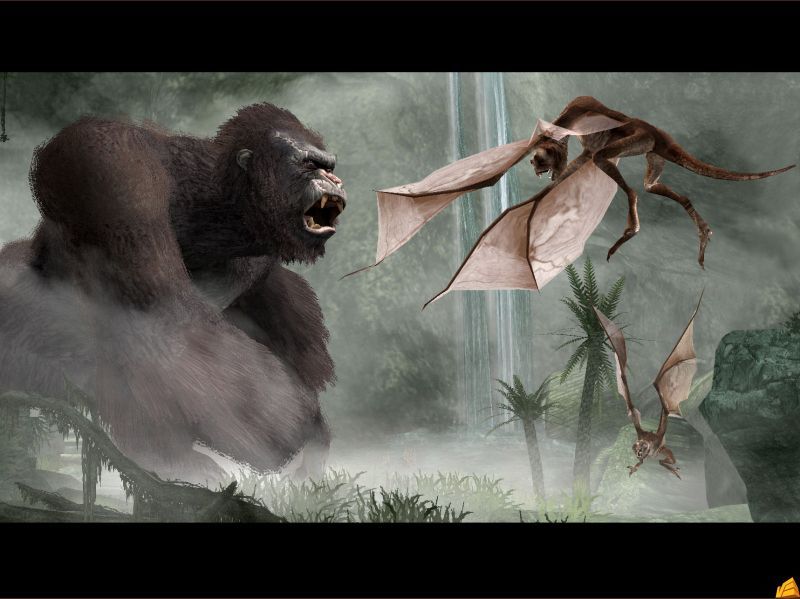 Pursued by two count 'em, two T-Rexes and a cavalcade of other subsidiary beasties, a lesser game would simply have this as one of those dreaded moving gun emplacement levels' that every shooter and its deceased mother has been churning out since Half-Life.

In the hands of Ancel, however, it's slightly different. Your aim is not to kill, but to delay - you have no hope of killing what's after you and it wouldn't fit in the game narrative either but shhh!

You can start off with machine gun fire, you can turn to Jack Black on the raft behind you to demand a spear to lob at your pursuers, you can set the spear on fire and ignite nearby patches of long grass or you can blast creatures out of the sky, which causes Rex and friend to pause for a moment and chow down on Batfink.

You don't have time to do them all and if you're not hasty, then you or one of your companions become brunch - it's linear then, linear as hell, but with Ancel's narrative and gameplay-orientated brainwaves coupled with the cinematic edge of the scene, then it neatly slips past my pessimistic side's radar.

Seeking to further assuage my panic, Ancel pats down his ruffled shirt and points out that there's another edge to his sword: Whenever you die we'll modify the game and exactly what creatures attacked you," he explains.

In other games, when you die you get the same repeated sequence and you can learn how to do it. Here though, you can play through again without seeing the same creatures.

And so now we come to Kong himself, cradling Ann in his arms and running through the jungle with mischief on his mind. What's more, as the game progresses it's evident that, in a fairly extreme example of the Stockholm syndrome, she slowly warms to her hairy monolithic captor.

Kong's controls are remarkably simple and his fights beautifully choreographed. My hands-on saw me take on two T-Rexes and what was on-screen was quite delightful: throwing batfinks into their mouths, watching them instinctively catch it and smacking them in the chops, climbing up massive ruins and delivenng WWE-style power-'bombs.

I've just had a kick in the ribs though, and so have to provide a caveat. From what I've played, I have to report that the Kong sections are nowhere near as well suited to PC as they are to console - not by a long way.

Please bear in mind that, obviously, I was playing incomplete code and Kong's earliest and therefore simplest and easiest appearance in the game.

But despite the apparent style and finesse in Kong's fighting, climbing and leaping, all I was doing at the other end of the bargain was providing an entirely unsubtle episode in button-mashing.

At the end of the day, whatever the Ancel pedigree, this is a game being released on many platforms and I can only hope that the same finesse seen in the FPS sections is brought to the Kong sections.

PC game-players can expect to have the most detailed and beautiful version of the game competing against the version on the much-heralded Xbox , with all manner of hi-tech lighting effects, normal mapping and infinitely more polygons than in the last-gen offerings.

However, whether Kong gameplay will suit the platform remains a case of wait and see. I, however, still have heavy dibs on the fact that it will by the time of release.

Don't let this word of warning get you down though: King Kong will without doubt be as big as its namesake and far, far cleverer.

After just playing for a few minutes I came across an unscripted moment when a raptor grabbed my leg. He's got my leg! It's not just that though: King Kong is taking the traditional FPS and doing loads of interesting things with it -turning it into a more cinematic whole -an 'event' game, in which the pursuit of reeling in the player leads to clever stuff like Skull Island's food chain and some blindingly obvious, yet previously unseen stuff as simple as the need to hold your nfle above your head when you wade through rivers.

With the team promising some extremely nice stuff" appearing after Kong's debut on the New York social scene at the close of the game, a stream of production notes and designs appearing from the WETA workshops on a weekly basis and remarkably frequent meetings with Jackson himself, King Kong is the rarest of beasts.

It's a movie game being made by people who don't wear suits, who care about narrative and gameplay and who certainly don't bother using an iron on their shirts.

It's a game that has direct interaction with the very highest ranks of the movie's production. It's a game with ideas at its heart that are big enough to hide the cash register that lurk behind it.

It's a good game too. All this and there's an absolutely gigantic monkey that features quite heavily. Let's ponder on the demise of one of the giant bats that I humorously labelled as batfinks' - one that got munched by the T-Rexes to save Adrien Brody on his thrilling river ride.

Everything in the game, yourself very much included, has its own predators and prey. Giant bats and centipedes chow down on similarly over-sized dragonflies and frog-things, raptors and larger carnivores nab giant bats and giant millipedes, while T-Rexes eat everything in sight and Brontosauruses eat lots and lots of plants.

You'll be able to use this to your advantage by jabbing at pond-life and keeping them wriggling at the end of your ever-handy spear to use them as bait.

One level I played featured an eminently rickety bridge Skull Island has lots of rickety bridges - you just can't get the tribal native workmen these days with a colony of giant batfinks hanging above it in characteristically upside-down fashion.

Now you could be boring, pick up the nearby sniper rifle and take pot-shots - or, if you're daring, adventurous and handsome like me, you can prong a forlornly buzzing dragonfly on the end of a pointy stick and lob the insecto-javelin into the chasm below.

If you're also me, however, then you'll slip and die - and simply use the sniper rifle next time as its far less dangerous. After A Brief search on Google Earth, I've finally accepted that Skull Island doesn't exist and that giant apes and prehistoric lizards will forever be confined to movies, games and some of my stranger dreams.

And after playing Peter Jackson's King Kong , my disappointment with the non-existence of the isle is also met with some relief.

Available on Amazon. Added to Watchlist. Best of Top 10 Stars of the Year. Underrated Gems. My favorite fight scenes. Use the HTML below.